Welcome to my personal homepage! Here you will discover more about my interests, what I do and where to find me on the Internet.

I am a software engineer and the technologies I currently use are Python/Django and previously C++/Qt.

I am not a scientist but I like working with scientists, for science institutions, in research, education and with free/open source software.

My day-to-day GNU/Linux distribution is Debian which I have enjoyed using since version 2.2 Potato (2000) both on my desktop and my server(s) when possible. I used to use KDE but on an old laptop I started using LXDE and then migrated to LXDE on all my computers around 2010.

I have my own particular email system setup based on fetchmail, mutt (yes, I read emails in text mode), Postfix and Dovecot (both on the server and client side) that I have used, cared for and tweaked over the years. Keeping the mail server running in a VPS is a small hobby that I have (and perhaps my small way to help with a decentralised Internet).

For programming IDEs: a long, long time ago I was adamant that I wanted to use vim for everything. Nowadays I use it for editing configuration files, making small edits or writing emails (with mutt). For programming I use full IDEs (PyCharm, QtCreator).

My current part-time contract is for the Swiss Polar Institute as a software engineer (Python and Django), systems architect and supporting data management software needs.

I am available for contracting for Python/Django or C++/Qt and specially (but not only) for jobs related to research, open science and free software. I am based in the United Kingdom. Get in touch via email (carlesweb@pina.cat) for any more information.

Some of my software

I have a portfolio of Python/Django applications that I have been working on recently.

I have always liked free/open source software and from time to time I contribute to some of the software that I use.

Currently my time and interest is focused on Django, django-crispy-forms and Frictionlessdata (an Open Knowledge Foundation project).

I am a big fan of OpenStreetMap. I wrote part of the backend of a mobile app to find Benches.

During my 10 years of employment at Mendeley I was part of the team of Mendeley Desktop (not open source).

I am a regular attendee at FOSDEM and enjoy participating in other free software conferences and activities such as PyCon, Python Code Dojos, Django Meetups, Django conferences, etc.

For many years I was writing on the blog, Pintant. Previously I wrote articles on Bulma, Catux and Debaday.

Common questions about my name

Why is your name Carles, not Carlos or Charles? Carles is in Catalan, Charles is in English and Carlos is in Spanish, Portuguese and Tagalog.

How do you pronounce Carles? Similar to Car-less. Like when I didn't have a car.

Why do you have an "i" between your surnames Pina i Estany? some people in Catalonia informally separate the first and second surnames with "i" which means "and". It's not in any official documentation but I got used to it when I was a child and I carried on doing it. 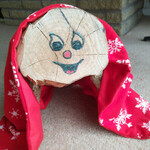 Who is the character in my profile photo? It is a "Tió de Nadal" (Christmas Log). Wikipedia has an interesting article. The tradition is that on Christmas Eve or Christmas Day children beat the Log singing a specific traditional song and the log deposits presents. Instead of Santa Claus, many houses use the Tió de Nadal (or both!).

It often wears a popular red hat (called a barretina) but when we prepared our Tió de Nadal in England we didn't have one handy, so ours has a red blanket instead.